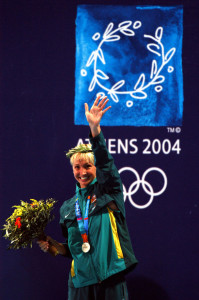 “I can’t believe I have hung in there and won an Olympic medal. Any medal would have been fine for me so silver is great.” Hanson said.

“I was just in disbelief when I hit the wall. I couldn’t actually line up my name with my position at first and then I saw a six but that was because I was in lane six. This is unbelievable.”

More than 80 swimmers and parents gathered at Aqualink Nunawading to eat breakfast and watch a replay of Brooke’s 100m Breaststroke race. With Channel Nine’s Today Show on air in a live cross, the small but vocal crowd cheered Brooke on as they watched the race.

Brooke’s training partners had earlier watched the race live and cheered her on to a personal best time. Brooke’s partner and club captain Jared Clarke talked about the emotions throughout the coverage earlier in the morning and the phone call he received from Brooke soon after the race.

Brooke’s coach, Mark Thompson, who is a member of the Australian Team coaching squad in Athens, was extremely excited about Brooke’s swim.

“How good was that!! Brooke did an awesome job to remain composed under the pressure. Although the conditions for fast swimming were not great (it was very windy) it was the same for everybody, so that wasn’t a drama. With 6 of the top 10 fastest 100m breast swimmers in history in that final, it could have been won by anybody. As we have seen with some other races at this meet, it doesn’t matter if you are world ranked no. 1 or the world record holder, you can still be beaten!!” said Thompson.

He went on to say that “Brooke swam a great first 50 and her second 50 was the fastest for the whole field and it was definitely the reason she got the medal. I don’t think they showed it on the TV, but Brooke didn’t realise for about 15 seconds that she had won a medal – she couldn’t line up her name properly and thought she had finished 6th. As you can imagine, she was pumped when she realised”.