Olympian and television personality Brooke Hanson and her family are embracing their move to the Gold Coast after almost 20 years in Melbourne.

The girl who turned “silver into gold” in a remarkable international swimming career, spanning 13 years, has settled into the Coast with husband Jared Clarke and their three children, Cooper, Billy and Matilda.

The Sydney-born Hanson won gold and silver at the 2004 Athens Olympic Games and six gold medals at the 2004 FINA World Short Course Championships in Indianapolis before embarking on a television and motivational speaking career.

“We are loving the sea change,” said Hanson, who grew up on Sydney’s Northern Beaches where she started her swimming career.

“The move to Melbourne was amazing for my swimming career, it’s where I met the man of my dreams and also played a major part in my career after I retired from the pool but the beach lifestyle has always been me.

“Currumbin has been close to our hearts after mum and dad moved up to the Coast from Sydney with my three brothers and sisters in 1998.

“So our love of the surf and the coastal life style eventually drew us to the Coast too and we are loving the move.

“We have got the kids involved with the Currumbin Beach Vikings surf club and they are loving it and of course we spend plenty of time at the pool down at Palm Beach Currumbin and paddle boarding and fishing down at Currumbin Creek – you can’t beat it.” 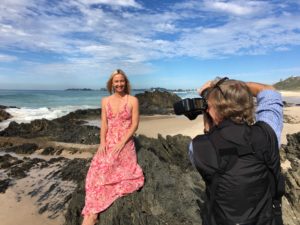 Hanson grew upon the beach at Freshwater and swam at Manly and Warringah swimming clubs before making the move to Nunawading in Melbourne where her career blossomed and she also met husband Jared, himself a top line National swimmer.

Brooke remains one of Australia’s most recognised Olympians, who made her debut for the Australian Swimming Team at the 1994 Commonwealth Games before going on to represent Australia over 25 times at major international championships.

Brooke’s was one of the real success stories of 2004, hearing her name read out on the Olympic team after winning three gold and one silver medal in front of a packed hometown crowd at the Olympic Trials in her hometown, Sydney.

After winning silver in the 100m breaststroke and gold as a member of the 4x100m medley relay team, Brooke went from strength to strength.

She created history at the 2004 FINA World Short Course Championships in Indianapolis where she won a record six gold medals – five individual and the 4x100m medley relay in world record time.

Since her retirement from competitive swimming Brooke released her autobiography “When Silver Is Gold” The Brooke Hanson Story and she loves nothing more than to share her inspirational story with everyone she meets.

Her television presenting on the TV Week Logie winning show “What’s Good for You” earned her a Logie nomination for Best New Female Talent before becoming the female presenter on the Nine Network’s Discover Downunder where she enjoyed exploring the best camping and caravanning holiday destinations around Australia.

Brooke has gone on to enjoy a successful career for herself as a television host and product ambassador and continues to balance her blooming professional media career with, motherhood, sponsorship appearances, motivational speaking, charity events and swim clinics.

She puts her name forward with charities that are close to her heart and through her speeches Brooke continues to motivate business people, athletes and school kids about the importance of believing in their dreams and never giving up.

Her interests include enjoying the great outdoors with husband Jared, trying to keep up with her children Cooper, Billy and Matilda and following AFL clubs the Gold Coast Suns and Essendon, NRL clubs the Manly Sea Eagles and locally the Gold Coast Titans, Rugby Union, surfing, swimming, stand up paddle boarding, camping, cooking, bike riding and listening to music.

With the move to the Gold Coast and the purchase of a Jim’s Test and Tag and Fire Safety franchise. Brooke is passionate about the assistance she can provide by getting workplaces safe and compliant.

After receiving her own electric shock in a work place accident Brooke along with husband Jared Clarke are enjoying their new venture as Franchisors for Jim’s Test and Tag – Northern NSW (131 546).

Brooke is thrilled to join the board of the Gold Coast Suns AFL team and she is also looking forward to continuing working with the Gold Coast 2018 Commonwealth Games Corporation after recently hosting the announcement of Sally Pearson as the first games ambassador.

“Living and raising kids in a Commonwealth Games City is so exciting and I’m really looking forward to the build up to a home games”.

“We are loving every second of our sea change and after the devastating loss of our second born son Jack, we truely know how short life can be, you only get one chance and we are embracing life everyday on the Gold Coast”

“Looking back I wouldn’t have changed a thing. I guess missing those Olympic teams in 1996 and 2000 just made me determined to finally make it in 2004 and defined my career – representing Australia so many times and finally at an Olympics is something I will cherish forever. I remember one of my idols Linley Frame saying when she won the 2001 World Championship – ‘if you get the chance to do it…do it’ …..and it’s an adage I have lived by ever since”. 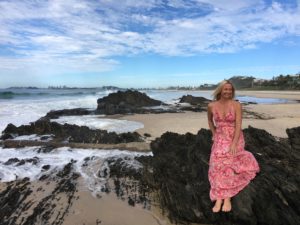